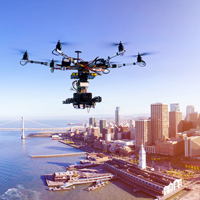 The Federal Aviation Administration (FAA) has finalised the first operational rules for commercial use of drones across the USA. The FAA has just released the first operational rules for routine commercial use of small unmanned aircraft systems (UAS or “drones”). This greatly relaxes the existing laws, and paves the way towards fully integrating these flying machines into the nation’s airspace. The new regulations are designed to harness technological innovations safely, to spur job growth, to advance critical scientific research and to save lives.

“We are part of a new era in aviation, and the potential for unmanned aircraft will make it safer and easier to do certain jobs, gather information, and deploy disaster relief,” said U.S. Transportation Secretary Anthony Foxx. “We look forward to working with the aviation community to support innovation, while maintaining our standards as the safest and most complex airspace in the world.”

The guidelines, which take effect in late August, offer safety regulations for unmanned aircraft drones weighing less than 55 pounds that are conducting non-hobbyist operations. The rule’s provisions are designed to minimise risks to other aircraft, as well as people and property on the ground. Pilots will be required to keep an unmanned aircraft within visual line of sight. Operations are allowed during daylight and during twilight if the drone is equipped with anti-collision lights. Drones will be limited to a maximum speed of 100 mph (160 km/h) and maximum altitude of 400 feet above ground level (AGL) or, if higher, must remain within 400 feet of a structure. The person actually flying a drone must be at least 16 years old.

Drones are still prohibited from carrying packages or other goods across US airspace – a setback for companies like Amazon and Google, which for the last few years have been trying to achieve this. However, the commercial potential for drones remains huge. According to industry estimates, they could generate more than $82 billion for the U.S. economy and create 100,000 new jobs over the next 10 years.

Until now, the FAA laws were highly restrictive, cumbersome and expensive. Commercial operators needed a pilot’s licence for even small drones and were forced to apply on a case-by-case basis. The new system is far simpler and will greatly increase the number of drones appearing in the skies.

“This is just our first step,” said FAA Administrator Michael Huerta. “We’re already working on additional rules that will expand the range of operations.”

DJI, a major manufacturer of drones, called the FAA’s announcement a “milestone” and commented further: “The new rules codify common sense – making it easier for a farmer to fly a drone over his fields, for a contractor to inspect property without climbing a ladder, and for a rescue service to use drones to save lives.”

However, concerns will arise over issues of privacy, security and civil liberties. For example, some of the more advanced drones may feature remote sensing technology and hi-res cameras. They could scan entire cities, at sufficient detail to read a milk carton from 60,000 feet away. Others could intercept mobile texts and phone calls. The new law does not specifically deal with privacy issues in the use of drones, and the FAA does not regulate how drones gather data on people or property. However, the FAA confirms it will be acting to address privacy considerations in this area.